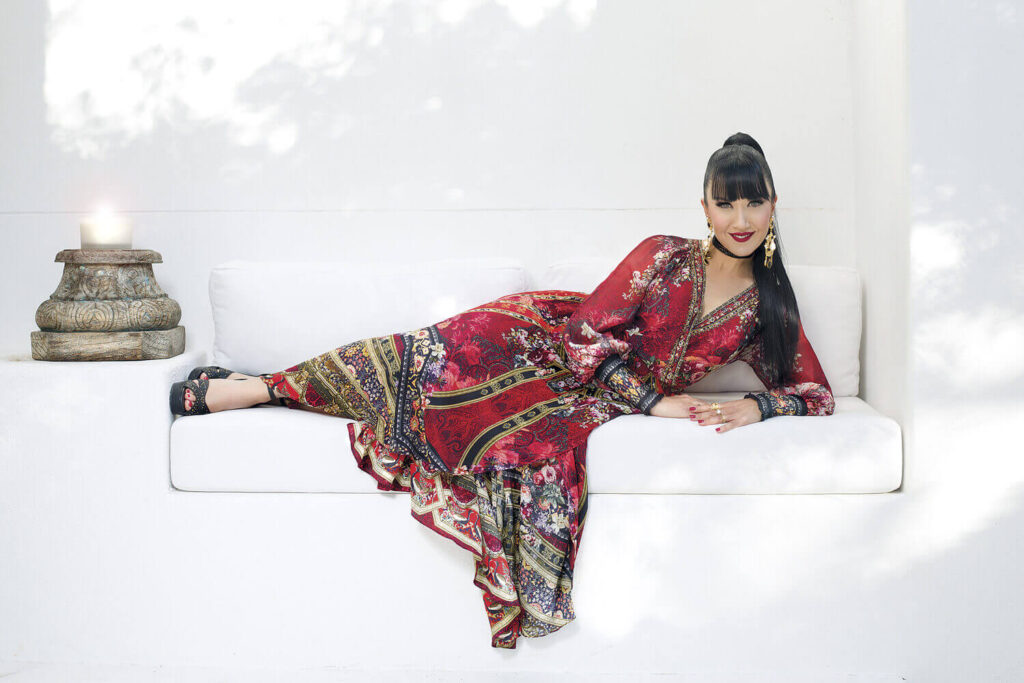 Business Coach, Ingrid Arna, is a powerhouse. She has such a vibrant energy and presence and has some real life-experience under her belt. We spoke to Ingrid for this edition’s feature article.

Ingrid is the founder and CEO of The Ingrid Arna Company and the creator of multiple industry-leading business coaching programs for women. She claims her company is leading the way in teaching conscious capitalism and building leaders who are devoted to global healing.
The mum of one is frank about her upbringing, saying, “My background was full of abuse and manipulation around money. I did not feel safe. I had to create my own security. I wanted to be free. I wanted to create a business and life led from my soul and passion, instead of from sacrifice, scarcity and servitude. “I grew up with two immigrant parents – a Russian dad and a Macedonian mum – who started a beauty salon and cosmetic manufacturing start-up under our house. At the age of five, I was packing boxes of wax – eagerly helping my parents build their company. This humble business that started in our kitchen became one of Australia’s largest cosmetic companies with its products distributed in 40 countries and counting,” she said. “Growing up in a family that took a little idea and virtually no capital and transformed it into a multimillion-dollar enterprise was a gift to witness. However, even in such an entrepreneurial household, I was sold the myth that corporate was best, and I believed it in my bones. “I grew up attending a prestigious private girls’ school, and my father was pretty clear about what he expected of me: I was to become a doctor, lawyer, or politician. The end.” Ingrid said, “It’s hilarious that I’m now getting paid more than a surgeon and a lawyer combined to consult for top brands and leading industry experts! #shameless #youcantoo.
“A large part of who I am came from fiercely fighting to create a life that wasn’t driven by fear or others’ expectations. But it took me time to understand these lessons and embed them into my life in a positive way. I had to rebirth myself to become the woman that could truly embody the level of work I’m committed to. The healing and forgiveness of self and others has been the key to service without servitude. My life experience became my core teaching, which I now use to educate women to claim social, political, and financial power in their own lives.”

Ingrid said, “The moment I took full responsibility for my life and stopped blaming everyone, my healing and true ascension journey began. “Within two months of launching my business, I made six figures while working 20 hours a week. The following six months saw me triple that number, and then triple it again shortly afterwards. “The more I let myself own it online – spoke up, uncensored my voice, and allowed myself to be seen – the more women showed up saying they’d been desperately praying for me and my work.
“Since getting my own business off the ground, I’ve packaged up the exact framework I used… and put it

into my coaching programs where I now share it with hundreds of divine women every year! “What I know for sure is: the more fierce, feminine role models we have, the better off our future generations will be.

“You don’t have to give up security or yourself to be an entrepreneur. I’ve found that the fusion of knowledge, experience and education that women have gained over their lifetimes makes us ripe for riches.”

Ingrid admits she has experienced some major turning points in her life, saying, “In 2010, I worked in NYC as a corporate and executive for $70,000 a year and was trapped in the grind of an 80-hour work week.

“I had my own fancy office overlooking 6th Avenue, but I felt like I constantly had to prove myself and work harder than the boys just to get by. My health suffered and I went from loving my job to hating it. I was absolutely over it, so I got busy hatching a plan to escape corporate life forever.”

Ingrid then created a clothing line. She admits she made mistakes, “The first was taking a year to get to market with my product, which meant I burned through my capital. The second was trusting a dodgy lawyer with my corporate kit.

“That was when I lost it all. The weight of the failure was almost unbearable. I was paralysed… trapped by the burden and shame of loss, grief, trauma, chronic fear, and overwork. I then experienced a health crisis like never before. Overcome with exhaustion and barely able to stand, I learned two crucial lessons: first, nobody was coming to save me, and second, I would never again partner with someone without solid legal protection of my assets and IP.”

Ingrid admits, “This was one of my darkest times, but it was also a moment of absolute clarity: I was single-handedly responsible for my fate. That’s not to say that you can’t seek help from others – they can encourage you, teach you, and provide you with resources – but ultimately, you must take action to ensure your own success. “I finally had no other choice but to stop and really look at myself and all the patterns of behaviour and suffering that were causing me to sabotage my dreams over and over again.

“Launching my coaching business happened in a whirlwind of leaving the corporate grind behind, losing my clothing company shortly thereafter, returning to Australia, my husband losing his job, and finding out we were expecting our beautiful daughter, Aria. “I realised after taking yet another client call from my hospital bed after her birth that I’d taken my corporate M.O. and transferred all the drama and drain to my own business. I was headed for burnout again unless something changed.” Ingrid said the end of the struggle and over-giving came when she did something radical, “That’s when I launched my mastermind, spent $10,000 on ads, booked 60 calls, and sold 17 spots. Within 6 months, I’d replaced my husband’s income and went on to sell $10K, $20K, and $50K packages. “Once I knew the way, I was able to repeat the process and 10x my results at the speed of light.”

Ingrid said, “My programs demystify the ‘how’ of turning your expertise into a consulting and coaching empire. “There is a lucrative consulting niche – a specific group of people with money to buy – for whatever knowledge, wisdom, and experiential expertise you have. You can find them online, and it’s easier than ever before. “Once you know the process, you can then turn those perfect strangers into ideal, highly-profitable clients and customers. “But… without a leveraged business model that allows you to cut your workload in half while exponentially increasing your income every single month, you’ll be trapped in a paradigm that will drive you and your business into the ground. If you want to be wealthy, you need the right system… simple as that.

“Building a business and legacy doesn’t have to be hard, but it does have to be strategic as all heck! At Ingrid Arna, we help women turn their genius into gold by packaging up their work into a scalable course, program or mastermind that delivers. “When you have a product or a service that delivers on its promise, the money, clients, and contribution are almost guaranteed. Or, as I like to say, when you solve someone’s problems, you’ll always get paid – in any economy.”

Ingrid works with people of all ages, “In fact, we just had a divine 21-year-old diva go from not being able to afford rent to hitting regular $10K months, and a 70+-year-old grandmother diva who doubled her income to $50K per month… while cutting her hours down by half,” she said. “But what we do goes far beyond just material gain – it’s also about helping women transmute vows of poverty and embody a whole new reality by giving themselves permission to release lifetimes of sabotaging stories and suffering around wealth.”

Ingrid intends for her business to become one of the leading brands in the world. “We are expanding our reach and will double in size over the next 18 months,” she said. “I want every woman to know that she’s good enough, knows enough, and is smart enough to build a profitable, beautiful online brand – without sacrificing their mental or physical health. “This is a pivotal time in history where women can create legacy brands… brands that truly give – where the care and service factor is paramount, but not without monetization. “My company is here to lead the new paradigm of divine femme business, which is all about the sacred fusion of spiritual passion, purpose and profit. When those three key ingredients are combined, they create a new divine frequency – one that is devoid of scarcity and is all about lush receiving, not overgiving and self-sacrifice,” Ingrid said. 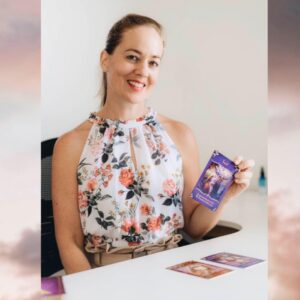 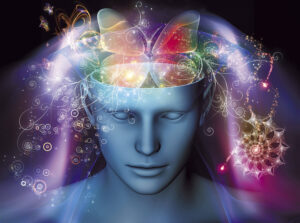 We Are What We Believe

Trauma and grief come from many causes and can even be carried over from previous lifetimes. We can carry them in all our belief levels, 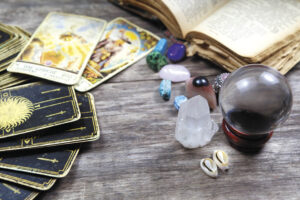 Why Did I Start My Business? My story 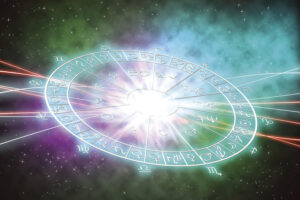 What’s in store for you in July, August and September?

Relationships are still in focus for 2022 and you may find yourself being presented with many opportunities to show kindness and to nurture, re-evaluate or 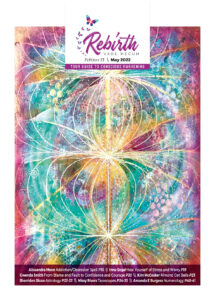